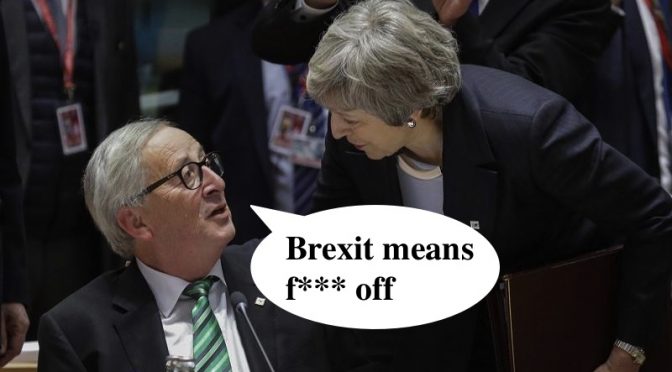 Brexit means f*** off, the rest of the European Union has told Theresa May, as she grovels for concessions in Brussels last night.

“Brexit means Brexit, and the will of the people is for a red, white and blue Brexit that only I can deliver. But for this to happen I need to stay in power, and that is why I have been running around the EU like a headless chicken begging EU leaders for concessions to appease rabid extremist Tories.”

“Even though the entire EU just told me to just go and f*** myself, I am pleased to announce that a new deal is now 95 per cent complete, so please let me stay in power a bit longer while I keep this shambolic shit-show going for just a few more months.”

“I would also like to remind everyone that it is in the national interest for me to stay in power as Prime Minister for as long as possible, so I can continue to cover up years of wrongdoing from my time as Home Secretary, including the truth surrounding my decision to shred Windrush documents, and my refusal to allow the security services to investigate Russian interference in UK democracy.”

The BBC’s Laura Kuenssberg tweeted: “Genius May wins historic backing of Parliament and the little people, strong and stable in the national interest. Not like vampire antichrist Jeremy Corbyn.”