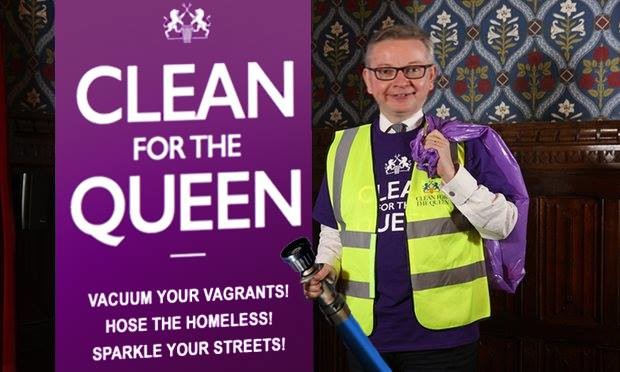 Secretary of State for Justice Michael Gove has today launched a campaign to clean up homeless people with fire hoses.

Mr Gove told reporters: “My visionary Clean for the Queen scheme is a call to arms for the common man to solve two problems: the homelessness life style choice, and the lack of funding for street cleaners due to local government inefficiency. I believe inside every homeless person is an aspirational conservative voter trying to get out, and I believe powerful fire hoses will motivate them to get up, get off benefits and into a job.”

The fire hose solution was first mooted by the Justice Secretary’s political hero and then Prime Minister Margaret Thatcher, who was eventually talked out of it by her then Home Secretary Douglas Hurd.

During the subsequent photo-call, Mr Gove mucked in with anti homeless conservative volunteers, where he hosed passerby Jeremy, aged 66, from Islington who had been mistaken for a tramp due to his lack of Savile Row tailoring.

Unfortunately, several members of the public mistook Gove for something else, and an attempt was made to deposit him in a nearby dog waste bin before he squirmed free shouting “it’s me Michael, I’m from the government.”