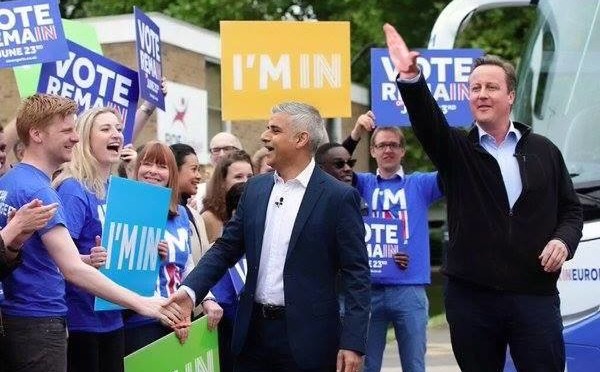 The Mayor of London Sadiq Khan has been caught sharing a platform with extremist Prime Minister David Cameron, it has emerged.

The mishap is said to have taken place as both men campaigned for the Britain to remain within the European Union. Mr Khan said: “we both believe passionately that the United Kingdom is better off as part of the European Union, but for very different reasons.

“I firmly believe the benefits of EU membership for the people of this country greatly outweigh any of the drawbacks.”

Mr Cameron added: “Look, I hate the poor and the vulnerable as much as the next hard-right Tory extremist, and I deeply resent the protections for worker and human rights that the EU has given us.”

“But as someone who is rich due to ripping-off the taxpayer, I strongly believe that remaining in the EU will allow me to protect my vast personal wealth, and keep getting richer at the expense of the poor.”

“I am also concerned about the prospect of an increase in the price of importing pork products from the continent, including pig’s heads.”

Trust us, we're not blatantly lying to you this time, plead senior Tories
Cave divers find Tory party and are now trying to guide it to Brexit
Tweet