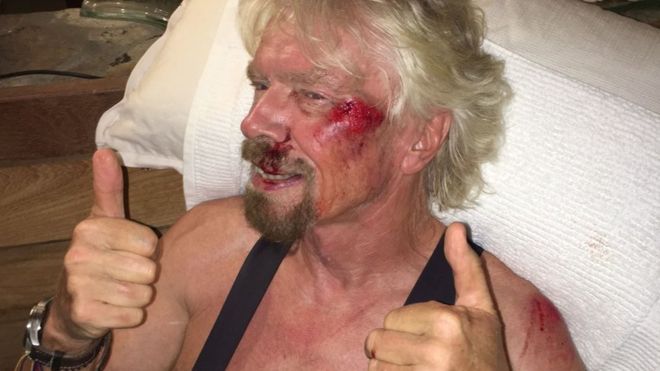 A spiv who made millions of pounds by ripping off British taxpayers now deserves our sympathy, he has decided.

The accident happened when Bond villain Richard Branson suffered a cycling accident on the Caribbean island Virgin Gorda, leaving him with injuries that he immediately photographed and released on the internet.

According to a statement released by Mr Branson, the incident occurred as he rode his solid gold bicycle down a hill. Worth around 110,000 pounds, Sir Richard’s bike also has chainrings fabricated from military grade unobtainium, and a saddle hand-made using the skin of a Virgin Trains passenger who was caught sitting on the carriage floor when there existed an unreserved seat he could have sat in.

“Delirious with joy over my successful smear campaign against Jeremy Corbyn, I had a momentary lapse of concentration and managed to ride head on into a mountain of cash from my NHS contracts.”

“I went flying head-first towards the concrete road, but fortunately my shoulder and cheek took the brunt of the impact, and I was wearing a diamond encrusted helmet that saved my life.”

“My bike was completely destroyed, but I’ll soon have an even more opulent one, to be paid for by the unfortunate British public who’ll be forced to pay more for worse treatment in my privatised bit of the NHS.”

The Pound should shut up and get over it, a Leave voter has decided
EU leaders were simply too scared to approach me, insists Theresa May
Tweet