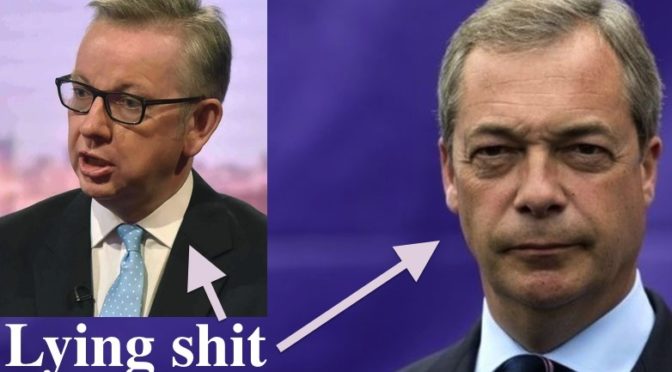 Speaking on the BBC, Michael Gove said: “Nigel Farage was instrumental in spreading the lies and hatred of foreigners that fooled 17 million British voters into voting for the destruction of Britain by Brexit.”

“All Brexit supporting politicians, however evil, corrupt or dishonest should be respected, not questioned or criticised. If anything, we should be rewarded with an immediate knighthood and a place in the House of Lords.”

“I know he won’t mind me telling you, but Nigel cries himself to sleep at night because of all the bullying he has been getting lately.”

“Among the most upsetting incidents happened when Twitter users asked why Nigel had decided to fuck off to the USA instead of staying in Britain to clean up the huge mess he’d helped make.”

“I know Nigel was also deeply hurt by suggestions that, as a millionaire former stockbroker who was photographed in a lift made out of gold, he is clearly not the beer swilling down to earth man of the people he often pretends to be.”

“I just think it is really unfair that Nigel Farage has had to suffer this kind of criticism, simply for being true to himself and acting like a xenophobic cunt.”

BREAKING: UKIP urges Britons to build bonfires out of books that displease the Fuhrer
May Day bank holiday to be renamed 'Theresa May Day' in recognition of her strong and stable rule
Tweet