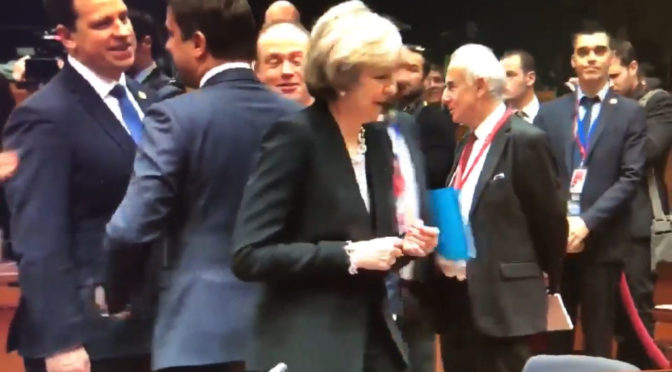 The other EU leaders did not shun me, they were simply too scared to approach me, Theresa May has insisted.

The Prime Minister told journalists: “I went in there armed to the teeth with bullshit soundbites about doing a red, white and blue Brexit, ready to battle for Britain like a true war hero.”

“If you look again at the video of me being ignored, you’ll see that the other leaders were actually just terrified of me. Their fear of my negotiating prowess was palpable, and clearly they all realised the only way for them to avoid defeat would be to avoid playing the game at all.”

One EU leader told Newscrasher: “British Prime Minister Theresa May is the best leader in the history of Europe, even more illustrious than Nicolae Ceausescu or Benito Mussolini. We were all really afraid to approach her in case she instantly vanquished us with a string of empty soundbites.”

On the EU negotiations, Tory MP Jacob Rees Mogg said: “Our exit from the EU will be so easy, we might as well wait out the full two years after triggering Article 50, and only begin negotiating at one minute before the deadline is up. I am unaware of anything that could possibly go wrong, save for acts of treason by unpatriotic remainers.”

“The onus will be on the EU to agree to our terms, or face being completely isolated from this great nation, so I’m pretty sure they’ll agree to all our selfish demand to stop contributing while still keeping all the stuff we like.”

Rip off Britain: Tory anger at ‘extortionate’ class A drug prices
Labour should consider expelling anyone who might not vote for me, says Owen Smith
Tweet