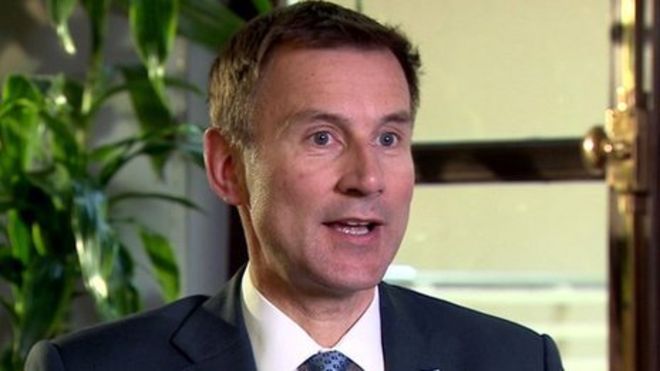 Jeremy Hunt has blasted Labour for attempting to weaponise what he has called his “deliberate mismanagement” of the National Health Service, it has emerged.

Speaking to reporters, the Heath Secretary said: “On June 23rd last year Britain held a legally binding referendum on the European Union and whether to immediately defund and privatise the NHS. The people have spoken unanimously, and the will of the people is now settled for all time.”

“As Health Minister, it has fallen to me to carry out the will of the people by deliberately mismanaging the NHS, to set the stage for introduction of patient fees and the eventual privatisation of the profitable bits.”

“As a true hero of the Great British Reich I have spend recent months battling for Britain against antisemitic trotskyist doctors who are trying to overthrow the government, and also against marauding patients who earn less than £200,000 a year and do not have private health insurance.”

“A hero like me will definitely vanquish these foes, but in the meantime I call on Labour to stop weaponising my blatant mismanagement of the NHS, and to join me in my war on the socialised universal healthcare that is ruining this once great nation.”

Several Blairite Labour MPs have jumped to the defence of the embattled Health secretary, with one unnamed source telling Newscrasher: “The NHS crisis represents an excellent opportunity for Corbyn to strike at the government and improve the popularity of our party, and that is why we’d like to help the Tories to change the subject as quickly as possible.”

“The fact that several of us also have a vested interest in private healthcare companies has nothing to do with our stance, of course.”

Only immigrants and Muslims to be harmed by abolition of human rights, tabloid readers confirm
Suffragettes to be dug up and jailed under new anti protest laws, says Theresa May
Tweet