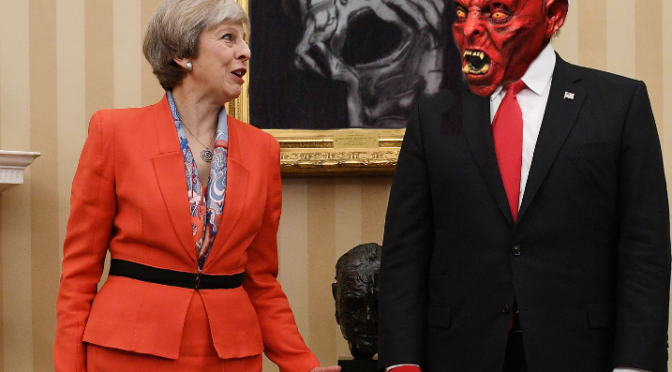 Satan is to be honoured with an official state visit later this year, the government has confirmed.

Despite strong opposition to the plan, Theresa May’s government is adamant that the visit must go ahead.

A government spokesperson said: “Satan has long been a great ally and friend of the Conservative Party and has masterminded, as well as influenced some key policies introduced by the current administration.”

The spokesman flatly denied that it is inappropriate to extend such an honour to The Father of Lies: “It’s just absurd that a tiny minority of loony, lefty, Guardian-reading, snowflakes are upset about his visit. How dare they try to defy the will of the people.”

“Sure, Lucifer isn’t exactly known for his squeaky clean image, what with all the eternal torture of souls and other shit. But we, as a nation, simply cannot afford to pass up the opportunity to suck up to such an influential underworld figure.”

The Devil’s chief of staff has made it clear that Satan is very much looking forward to the visit, and in particular his stay at Buckingham Palace, where he will be reunited with his old friend the Queen.