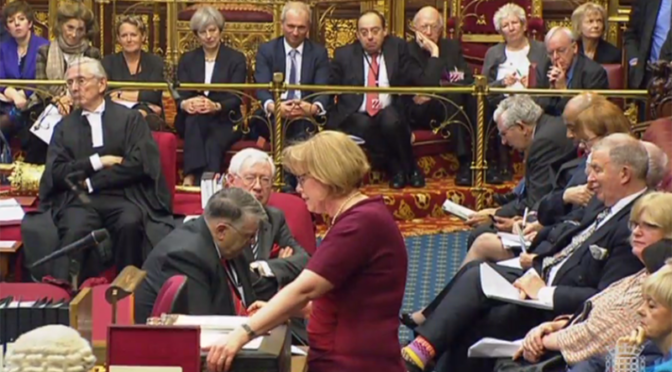 Theresa May will to turn up and stare at anyone who tries to thwart the will of the people, it has been announced.

Speaking to the BBC’s Laura Kuenssberg, the Prime Minister said: “The unwritten constitution of the United Kingdom merely suggests how the government might consider going about its business, but as supreme ruler of this kingdom I am entirely within my rights to ignore the Constitution when it gets in the way of my tyrannical ambitions.”

“And that is why I today violated centuries of constitutional convention by entering the House of Lords, where I gave evil looks at anybody unpatriotic enough to not back my colossal scam against the British public.”

“The mark of a mature democracy is that once a decision has been taken, however flippantly, the country must never be allowed to change its mind.”

“Although it is good for the people to decide things about how the country is run, especially when the main parties collude to offer no real choice whatsoever, it should also be recognised that sometimes the people do not truly know what they want.”

“As benevolent dictator of this proudly white and heterosexual nation, this country in which I enjoy a 110 per cent approval rating, only I could ever know what the people truly want.”

“And that is why Brexit and the annihilation of the NHS are definitely going to happen, whether the people want that or not.”