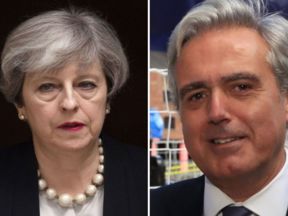 A Conservative minister who was caught sending his female assistant to buy toys from a sex shop was merely conducting research into continental sexual practices, it has been announced.

Speaking outside his family home alongside his wife, International Trade minister Mark Garnier told reporters: “I’m not going to deny it, because I’m not going to be dishonest.”

“I did send my secretary to the sex shop to buy vibrators, but only as part of an international research project to study the sexual practices of continental Europeans.”

“As a Conservative politician I am among the most honest and trustworthy people in the country. I would not lie about something like this.”

“I would never have used these devices myself, as I only like to shag in the missionary position while fantasizing about the glory of Brexit.”

“I would also like to thank the BBC for downplaying this scandal in the national interest, while continuing to hold Labour MPs to account for much less offensive remarks made a long time before they entered politics.”

BBC declares war on Stewart Lee and other comedians who criticise Tories
I am DETERMINED to drive the country OFF A CLIFF, says Theresa May
Tweet