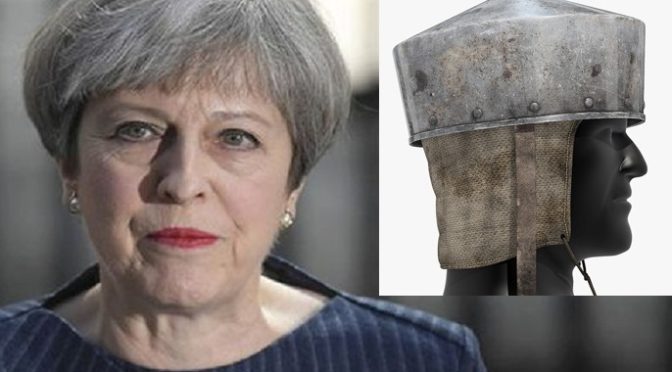 The Prime Minister believes her basin haircut makes her look like a Crusader knight, it has been revealed.

An anonymous source with close links to the Prime Minister said: “Theresa May is very keen to show off her Christianity and dispel the myth that her policies of starving the poor and hounding the disabled are not compatible with the Christian faith.”

“After looking at a number of possible options, it was decided that a basin haircut would make her look a bit like a Crusader knight, providing just the right look as she strives to carry out the austere will of Christ.”

“We worked closely with a top hair stylist to ensure the PM didn’t end up looking like a massive bellend. A recent poll shows most people think she doesn’t.”

However, a recent poll for Newscrasher found that more than half of respondents believe Theresa May is in fact a massive bellend.

Further elaborating on Mrs May’s hairstyle makeover, the anonymous source added: “Labour voters might not like it, but the fact that the Crusaders went on a murderous rampage in the Middle East, slaughtering everyone in their path, is expected to play well with the prejudiced and callous Tory and Ukip voters to whom she wishes to pander.”

“The PM particularly wants to show she is a strong, fighting woman who is battling for Britain against saboteurs and the treacherous European Union who are trying to defy her iron will.”

“The Eurocrats appeared to be visibly shaken with fear during her most recent meeting in Brussels. However, some unpatriotic commentators from the fake news have suggested that they may instead have been shaking with side-splitting laughter at her ineptitude.”

“In recent months our team has come under sustained attack from problematic thugs on social media, who have pointed out that if the Prime Minister was a genuine Christian, she would not plunge children into poverty or sentence the most vulnerable members of society to death.”

“We believe the Momentum terrorist group are behind this campaign of bullying, and we call on Jeremy Corbyn to immediately shut down the group, so the Prime Minister can get on with ruining ordinary people’s lives with the impunity she desires.”

NHS debate not as interesting as giving platform to xenophobes, says David Dimbleby
Theresa May ran from Commons "to have a massive dump", claims number 10
Tweet