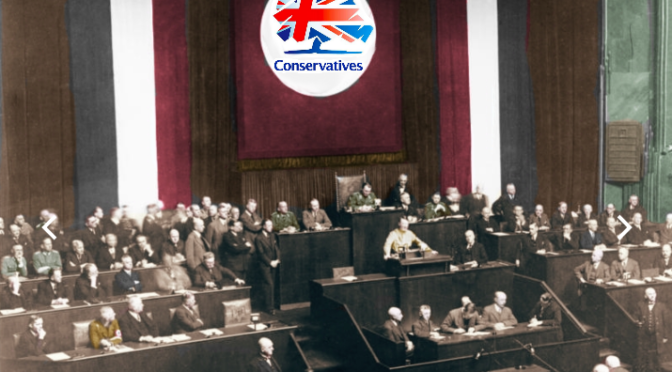 People on the internet have been making comparisons between the Tories and the Nazi Party of Second World War fame, but how similar are they really?

Is it really fair to compare the depraved acts of an openly fascist organisation to what the Nazis did? In this article we list 7 key ways that set the Tories and the Nazis apart.

1. Theresa May does not sport a particularly obvious moustache. Everyone knows that if fascism ever resurfaces in Europe, its leaders will wear exactly the same clothes and have identical facial hair as Hitler did. Because Mrs May does not have a moustache, at least when out in public, she clearly cannot be a fascist.

3. The Conservatives do not speak German as their first language. Also, the party leader is British, not Austrian, which just goes to prove the Tories are not a party of fascists.

4. The Tories pretend to be the party of the workers in a slightly different way to how the Nazis did. Although both parties dishonestly pretend to best represent the interests of the workers, the Conservative Party is clearly different because it does not include the words ‘socialist’ or ‘worker’ in its official name.

5. The Conservatives have consistently failed to get the trains to run on time. Even that oaf Mussolini managed to make his public transport run on time.

6. The Tories have no particular interest in invading Poland or Czechoslovakia. However, they are more than happy to sell arms to questionable regimes and fuel conflict in the Middle East, resulting in a huge amount of death and suffering, but this is quite different and totally not immoral.

7. The ‘work sets you free myth’. Former Conservative Secretary of State for Work and Pension did proudly declare “work sets you free” on live national television, but he didn’t order signs with that Nazi slogan to be hung over the entrance of places of state-sanctioned suffering, also known as Job Centres.

Do you agree or disagree? Add your comment, or other examples, below this article.