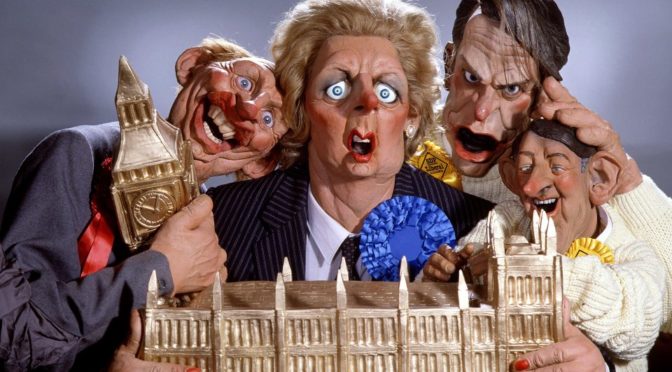 Satirical show Spitting Image will return to BBC this spring, but will focus exclusively on Jeremy Corbyn being ‘unelectable’, the state broadcaster has confirmed.

Tweeting on Twitter, the BBC’s Laura Kuenssberg said: “We thought it was about time to bring back Spitting Image, but this time around the show will not shy away from the most pressing political questions of the day.”

“Instead of satirising boring things like Tory incompetence or the demented behaviour of the Prime Minister, Spitting Image will altogether avoid any kind of criticism of the Conservatives and will instead focus on Jeremy Corbyn and why I say he is unelectable.”

“Keeping Jeremy Corbyn out of power is in the public interest of the will of the people as embodied by our supreme leader Theresa May, whose divine right to rule cannot and must not be challenged, ever.”

“Corbyn will be shown as a vampire antichrist who is trying to overthrow the legitimate far right government using the ballot box, even going as far as to try to purge Tory MPs from their rightful seats by winning more votes in a general election.”

“Theresa May, however, will be shown as a saintly figure who works tirelessly to make sure the poor and the needy are well provided for, despite unpatriotic opposition from the Labour Party, who ruthlessly defy her iron will and cause the collapse of the NHS by talking the country down.”