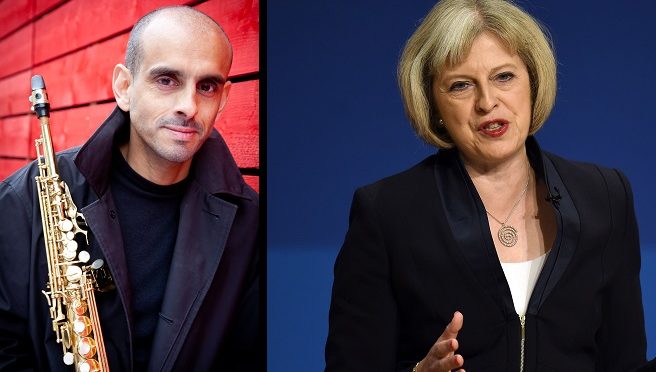 I recently had the pleasure of hooking up with critically acclaimed Jazz musician Sean Khan to chat about Moment of Collapse, the first single from his new album Palmares Fantasia, and its connection to current British and World politics.

We meet in a little-known tea house located within Oporto’s arts quarter, and while we wait for our Rooibos tea, I ask Sean what inspired the lyrics of Moment of Collapse.

Sean: “Moment of Collapse is a little connection to what’s happening at the moment with the world going through a political crisis, partly fueled by the uncertainty of Brexit and the uncertainty of what’s going on in the States with Trump.”

“It’s a message that people should try to come together, instead of looking to move away. We’ve been there before in the thirties and it was absolutely disastrous for Humanity. It’s shocking that people just don’t want to look at that and try and learn from that.”

Me: So there’s a strong political message behind this track.

Sean: “I’d say it’s actually more of a humanist message to be honest. Politics basically is just words and theories, but here I’m trying to reach out with a message that’s more spiritual than political.”

“People are worried about their jobs, whether they can  get through the year financially, they’re worried about their kids. And then we get these professional provocateurs like Nigel Farage, who come in with the most ridiculous messages about blaming foreigners or taking back control, and people are starting to listen to them again because the global culture has become so dumbed-down. Don’t listen to them, don’t follow these people — that’s a message I wanted to convey with Moment of Collapse.”

We agree that the public generally know there are big problems in modern Britain, but not enough people have worked out that the real cause is not the EU, foreigners, or any of the other scapegoats that the right have pointed the finger at.

Sean: “That’s the great illusion; it was used in the thirties by fascist groups and it’s an age-old rehash of the same nonsense, the economic system is in crisis due to the way it’s run. It’s not really run on purely capitalist lines, it’s run on corporate lines which is very different.”

“Capitalist thinkers often quote Adam Smith, but he wouldn’t recognise what they are doing in his name, exploiting individual talent, doesn’t mean you have to exploit whole groups of people, and then blame everyone else when the system fails.”

Inevitably, I ask Sean what he thinks about Jeremy Corbyn.

Sean: “Frankly, I’m appalled at some of the rubbish that’s been written about him. This whole  political class has failed large groups of people, and we’ve got to look closely at what Corbyn is putting forward, whether he’s going to seriously tackle the crises in the NHS, in education and elsewhere. Fundamental societal structures have got to be reinforced in a crisis, not taken away.”

“I’m not a rabid left winger per se, I’m just looking at the faults of the system. I completely agree with allowing the individual to exploit their talents to earn a living, but there also have to be systems in place to help people less fortunate, and if we get rid of those systems society becomes less civil and we all suffer the consequences. This is what Moment of Collapse is all about.”

“In recent years the public have only ever really had a choice between seriously corporate global capitalist leaders or rabid right wingers. It’s a false choice that I don’t want and I doubt most other people want it either. There needs to be a proper alternative that doesn’t involve the complete crushing of the individual that most forms of communism advocate.”

Me: What’s your take on what Noel Gallagher recently said about Corbyn? (“F*** Jeremy Corbyn, he’s a communist”.)

Sean: (laughs) “Did he really say that! I don’t want to insult Noel Gallagher because he’s a tough guy, but pop music by its nature is not very deep music, and the guy’s obviously said something that’s a bit silly and throwaway. When you get celebrities getting involved in politics at a really facile level like this it can be a little embarrassing.”

“I don’t expect Noel is affected by this government’s austerity policies at all, but quite a lot of the people who listen to him will be, and it’s quite sad to think that he may have turned some of his fans away from a Labour leader who, for all his faults, is probably represents the best chance we currently have to fix this broken country.”

“No, I don’t think Corbyn’s a communist, and his left wing ideals are really being overstated by Noel and loads of others. People need to step back and understand what Marxism or communism actually means, and it’s a far cry from what Corbyn is proposing.”

“On the other hand, Theresa May is appalling. She’s self-serving, only interested in staying power, and has no regard for the people she’s meant to be serving. It’s really obvious that she’s got into bed with rabid nationalists just to maintain her power. And when you’ve got even Tory rebels saying hang on, this is the wrong move, it’s obvious there’s something seriously wrong with this picture.”

Palmares Fantasy is available to preview and order here.