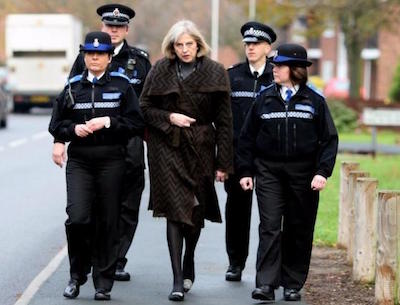 It is in the national interest to suspend democracy for a while, to prevent the people from stopping Brexit or voting me out of power, Theresa May has announced.

Speaking to journalists on a flight to the United States, the Prime Minister said: “I am on my way to lick the boots of President Trump, and I have better things to do than contemplate trivial matters like whether the public want to be ruled by a far-right authoritarian, or whether we should crash the economy and leave the little people to starve to death in the aftermath.”

“It is simply not in the national interest to let the public have a say at this point, because there’s a chance they might boot me out of power and stop Brexit.”

“I am clear that the public chose this strong and stable government to rule over them after a fair and democratic election, and it is despicable that some antisemites and terrorist sympathisers are now agitating to overthrow the Will of the People via the ballot box.”

“However, I am willing to allow an election in 2022, by which time we’ll be out of the EU with no deal, the NHS will have been sold off to American corporations, and hundreds of thousands of low net worth individuals will have died as a result of Universal Credit.”

Brexiter fantasizing about civil war somehow thinks the young will do the fighting
War with Russia ought to distract you from Brexit and Tory misrule, says Theresa May
Tweet