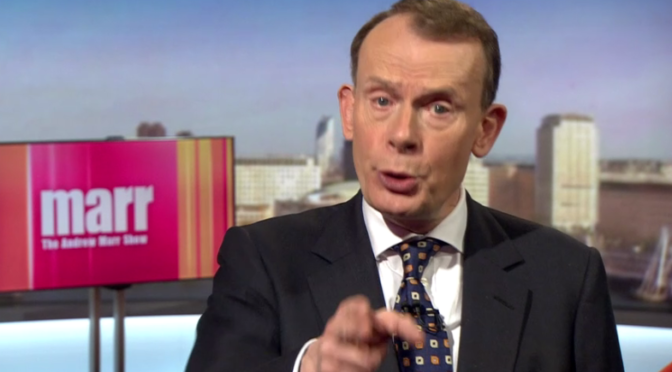 Suspected criminals and blatant fascists must be given a platform to lie to the public because of “balance” rules, the BBC has announced.

The announcement comes as suspected criminal and far right activist Arron Banks is set to appear on The Andrew Marr show.

Defending the decision on Twitter, the right wing BBC host Andrew Marr wrote: “As the state broadcaster, the BBC has strict rules handed down from the Conservative Party which means that if it is unavoidable that some uncomfortable facts come out, then we need to balance those facts by letting someone from the far right spout lies unchallenged on live TV.”

“For example, the failed businessman Arron Banks is being investigated for crimes related to the source of his large donation to the Leave campaign. But because revelations about his alleged criminal activity means the validity of the referendum vote is now highly questionable, our balance rules kick in and he must be allowed to tell his side of the story, which is basically just a pack of lies.”

“We also have to consider the will of the people, which is and always will be what the Conservative Government say it is, so Brexit is the only true path and all other options are unpatriotic and antisemitic.”

“Under the same rules, we are also obliged to hold the opposition to account over their treasonous attempts to seize power via the ballot box. And that’s why we’ll need to spend the whole of next week talking about claims of Labour antisemitism, to take the heat off our strong and stable dear Leader who’s in the shit for blocking criminal investigations in criminal activity by Brexiters.”

Leave voter Chris Bumfield tweeted: “Arron Banks should be given a knighthood for leading us to national salvation, so I utterly reject the really strong evidence for him being a treasonous criminal and lying twat. I don’t care if Brexit was basically a huge con which will ruin all our lives, as long as injustices like Polish workers receiving Child Tax Credits while working in Britain are ended.”

And who cares if the young won’t be able to go and study or work abroad? They can easily get a job picking fruit or wiping elderly people’s bums as a result of the exodus of EU workers, so the young should really be thanking us for the exciting job opportunities we ave created for them.”

Our Lord Jesus Christ would support Tory austerity, claims Stephen Crabb
I have no shame and will NEVER resign, says Boris Johnson
Tweet