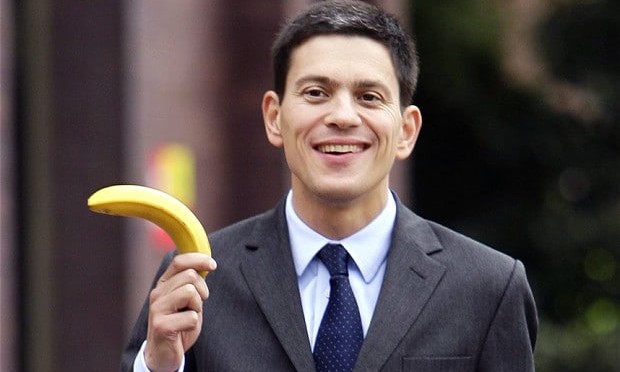 A man holding a banana believes he looks prime ministerial, it has emerged. Former Foreign Secretary David Miliband, who decided to move to the USA and get rich working for a charity after his failed bid for the Labour leadership, said: “Even though I have no policies, no ideals, and no integrity, I think I could be prime minister.”

“I’m not my brother, and that’s why I can win”, the banana-wielding former politician added.

“I sulkily quit UK politics because I failed to get elected as leader of the Labour Party, a position that was mine by rights. I just do not understand why the party rejected me for Ed, who had actual ideas and shit.”

“My qualities are limitless, such as being tainted by the Blair years and the Iraq war, my implication in the ‘extraordinary rendition’ scandal, and my cynical briefing against my own brother when he proved more popular and became party leader.”

“What’s more, as a true Blairite I have no ideals except obtaining power and getting rich, and I have no ideas about how to address any of the major issues facing the British people. Issues like grinding poverty, the destruction of the NHS, or homelessness, none of which I give a shit about.”

“With the unfortunate death of Jo Cox, I thought I could easily get myself parachuted into her parliamentary seat, from where I would be able to launch a new coup against the wing of the party that wants to make people’s lives better, but once again I was cruelly denied my birthright of becoming leader and prime minister.”

“The people of Batley were betrayed when I was stopped from honouring the memory of Jo Cox by furthering my own personal ambition to get into power and to get as rich as Tony Blair.”