Britain is a Christian country and should stay that way, according to hateful bastards who have no actual Christian values.

Chris Bumfield from Lincolnshire told Newscrasher: “Despite being a hateful cunt who doesn’t follow any of the tenets of the Christian faith, I like to go around saying that we should keep Britain a Christian country because it’s a secret code that means I don’t like Muslims, immigrants or ethnic minorities.”

“Immigrants make me feel uncomfortable because some of them look a bit different when I see them around town, they have different customs, and some of them speak using words that come from a language that often is not English.”

“I also feel it is somehow a problem that there are so many foreign-born people living in Britain today, although that fact that I cannot give any rational reason to justify this assertion ought ring alarm bells.”

“Like Milo Yiannopoulos, I know I’m definitely not bigoted because I’ve had sex with a black person once before. But I really feel my patriotic British pride is being taken away from me by the presence of people who are a little bit different in very minor ways.”

Far-right terrorism isn’t proper terrorism, the Sun, the Daily Mail and the BBC have decided.

An anonymous source at the Sun explained: “It would be wrong to label Thomas Mair and other violent far right criminals as terrorists, because a terrorist would need to be an enemy of the state, not somebody who has a similar political ideology to this paper and the Conservative government.”

“Rupert Murdoch simply wouldn’t stand for it. I’m almost certain he’d be forced to sack Theresa May if it were to happen.”

One well known Daily Mail columnist said: “We might publish a few words about the latest far-right terror attack on page 13, but we’ll try to blame the EU, immigrants and Jeremy Corbyn instead of the real villains.”

A spokesperson for the BBC said: “Because we’re in the process of normalising the far-right political ideals that the Prime Minister would like the general public to embrace, we have to be careful about how we respond to far-right terrorism.”

“The PM and Rupert Murdoch are both very keen for the public to understand that British fascism is an entirely benign force, as long as you’re white and very thick.”

“In addition to giving a platform to far right extremists like Nigel Farage or inviting fascist groups to join the audience of Question Time, we are also doing our best to pretend that recent far-right terrorist attacks were not real terrorism, and that the terrorists themselves were not incited by the toxic politics of the Tories, Nigel Farage, or the right wing media.”

Far right politicians have canceled a march over fears that people from far right groups might attend, it has emerged.

Nigel Farage said: “It is with a heavy heart that we have been forced to cancel our far right march on Westminster, due to concerns that our expected army of 100,000 far right marchers might get infiltrated by people from far right groups like the EDL, Britain First or the Conservative Party.”

“Of course, when I say heart I mean the black piece of stone situated in my middle mediastinum, where a normal person’s heart would be.”

UKIP Fuhrer Paul Nuttall PhD added: “When we organised the march, we only thought a bunch of Mail and Express reading ignoramuses would turn up and express their fascist views about Europe and the independent judiciary.”

“However, it quickly became apparent that people from far right groups were also planning to attend, in order to express their fascist views about Europe and the independent judiciary.”

“In addition, we also realised that even with Britain First and the EDL in attendance, the total number of people at our march was going to be embarrassingly low, somewhere between 21 and 22.”

“But that’s not the real reason we canceled, honest.” 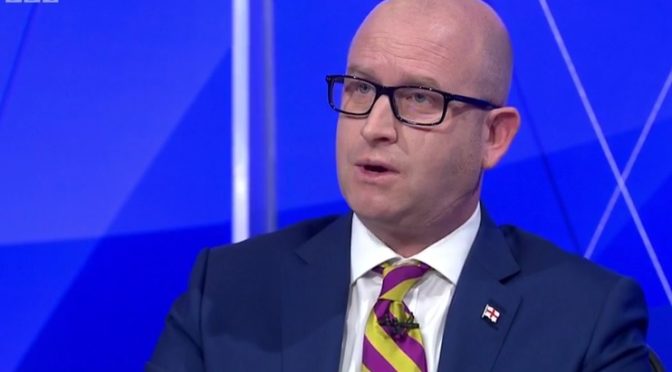