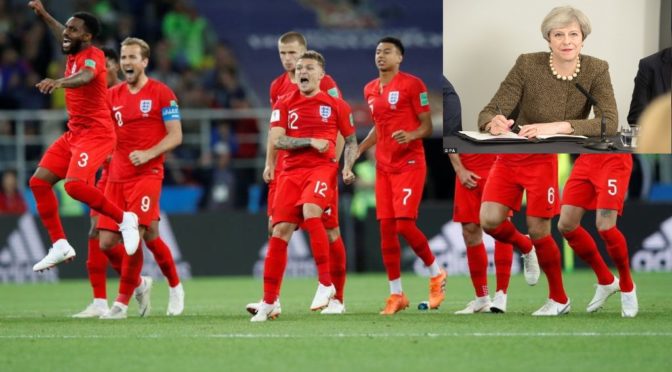 England are to be withdrawn from the FIFA World Cup in order to respect the will of the people, a spokesman has confirmed.

Speaking at a press conference at the headquarters of the FA, the spokesman said: “The Prime Minister has instructed the Football Association to withdraw England from the FIFA World Cup effective immediately, in preparation for the 2018 Commonwealth Football Cup which will be held in Belize during November and December, and the FA are pleased to confirm that we have formally given notice of our withdrawal from both FIFA and UEFA.”

Asked by a Sun reporter whether he accepts that “the will of the people is to quit the World Cup like Rupert Murdoch says it is”, Gareth Southgate replied cautiously: “It’s not ideal because England still had a chance of reaching the final of the FIFA World Cup, having reached the quarter finals tonight after our victory over Colombia, and the lads are understandably disappointed to be going home early, but we have to accept at the end of the day this isn’t a democracy and Theresa May’s iron will must be obeyed.”

Also in attendance was Matthew Hancock, the Secretary of State for Digital, Culture, Media and Sport, who told reporters: “We are proud to announce England’s immediate withdrawal from the World Cup, freeing our once proud footballing nation from the shackles of the unelected and corrupt supranational body called FIFA.”

“British fans will soon be able to enjoy exciting fixtures such as Barbados vs England, Wales vs Nauru and Canada vs Scotland. Our researchers have predicted that Harry Kane will win the Commonwealth Golden Boot award with between 100 and 150 goals due to the low quality opposition, and we believe an easy England victory will provide a much needed morale boost for gammons at a time when Brexit is turning out to be pretty shit.”