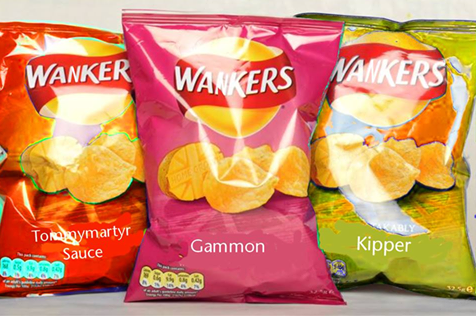 Walkers Crisps will add a new flavour to their line of potato crisps after coming under pressure from Brexit voters, it has been announced.

Speaking to the BBC, the CEO of Walkers Crisps said: “Walkers Crisps has been the subject of fierce protests on social media due to our links to Gary Lineker. We have listened to the concerns of Brexit voters, and have added an exciting new flavour to our line of crisps.”

“Our new Gammon flavour crisps will allow Brexit voters enjoy our delicious potato crisps without compromising their values of blind nationalism and hatred of anyone who is different or has a different opinion to them.”

“We also feel Brexiters should get exactly what they voted for, and because of this our new Gammon flavour crisps will be priced significantly above our other flavours, to reflect the economic damage that Leave voters have knowngly brought upon British industry and consumers.”

“At £3.50 per bag, Gammon flavour crisps are the ideal accompaniment for the beans on toast dinner that the average Leave voter will eat for the next 20 years while the economy recovers from their preferred ‘Mad Max’ Brexit.”

Based on a meme by Dave Poole.