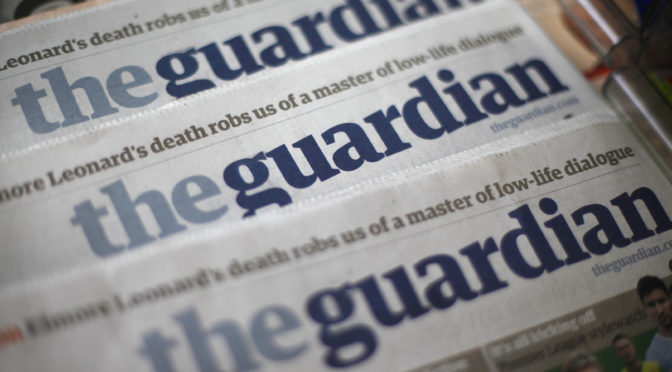 The Guardian newspaper is pretending to care about the terrible effects of Tory rule, but attacks anyone who has a track record of wanting to help the victims of Tory policies, it has emerged.

A spokesperson for the paper said: “We have a long track record of pretending to care about a wide variety of problems, like child poverty or the crumbling National Health service.”

“In an ideal world we would solve all these problems and more by electing a left wing government that is not afraid to tax the rich,  invest in good public services, and strengthen the rights and conditions of workers.”

“However, the people hit hardest by Tory rule will need to have patience and wait just a few more years or decades, until relatively well-off liberals start to feel comfortable with having a marginally left wing government in power again.”

“The Tories are bad and everything, but when someone like Jeremy Corbyn says he wants to improve the NHS and give proper funding to public services, our generally well off readers get scared. Some of them have already been forced to shop at Aldi, for fuck’s sake.”

“So, for the time being Guardian Ltd believes Theresa May is a safer pair of hands than Jeremy Corbyn, who has been extensively smeared by the right wing media, ourselves included.”

Guardian subscriber Chris Bumfield said: “A few years ago I wouldn’t have touched the Guardian with a bargepole, because they were always banging on about bad shit in Africa, environment or child poverty.”

“But I started to warm to the paper when it come out in support of safe politicians who will definitely ignore all the problems currently faced by the least well off in society, such as closet Tories Vince Cable or Tom Watson.”

“And it was thanks to the Guardian’s brave reporting that I learned How fair and balanced Laura Kuenssberg and her relentless campaign of anti-Corbyn smears are.”