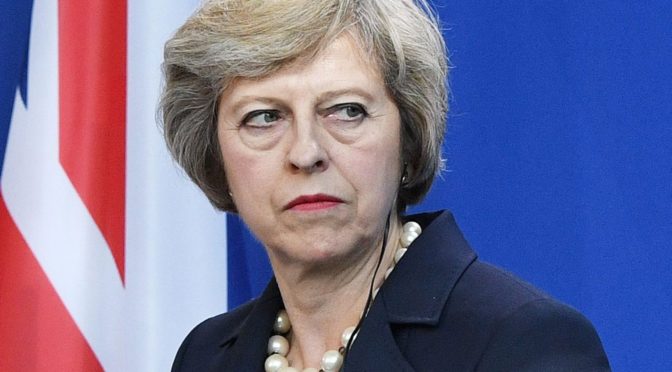 The latest surge in Labour membership indicates that the people want an end to democracy and a National Socialist government, Theresa May has concluded.

The Prime Minister said: “The Labour Party has seen a recent surge in new members, many of whom want a more socialist Britain. Listening to the British public, I will give them the National Socialist rule they clearly now want.”

“Of course, my subjects don’t yet know they want me to rule them with an iron fist, stamping down on their faces for eternity, but I am clear that they want precisely what I want.”

“Jeremy Corbyn is socialist but he only represents Islington and Labour Party members. Only I can roll out socialism across the entire country to create the British National Socialist state.”

“National Socialism has been given a bad name by the actions of the National Socialists who ran Germany in the first half the 20th century, but there’s no reason why this system of government cannot be tried again, with a strong and stable leader at the helm.”

“I am very clear that Hitler was a quite bad person who made mistakes, such as exterminating Jews instead of cynically weaponising them against the opposition. But I am the new Nelson Mandela, as I hope the media has now convinced you all, and I will rule for the ordinary people as I promised when I seized power in 2016 without a single vote being cast.”

“What’s another broken promise to a serial liar like me? I break electoral promised more often than George Osborne snorts coke.”

I have way more blood on my hands than the DUP, boasts Iain Duncan Smith
Brexiter fantasizing about civil war somehow thinks the young will do the fighting
Tweet