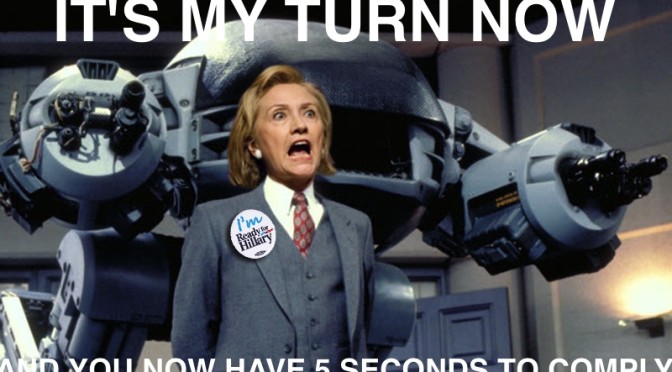 When Gary Kasparov lost to chess computer Deep Blue in 1997, IBM marked a milestone in artificial intelligence. But Google may have now earned its own position in the history books with the announcement Hillary Clinton is actually a product built by its subsidiary Deep Mind. The announcement from Deep Mind confirms the long-running suspicion of many voters that Hillary is in fact a robot.

The project involved constructing a system capable of beating the best human politicians in the world at a game known as Politics. Politics involves a red team and a blue team competing against each other to not be as crap as the opposition, and is far more difficult for a computer to master than a game like chess.

Hillary V1 was originally deployed in 2008 against youthful Chicago lawyer, Barack Obama, but the machine’s software gradually malfunctioned and ended up crashing in Binary Itinerant Translation Code Halt — or BITCH for short. This time the Deep Mind team have tried to overcome the BITCH bug with Hillary Mark 2, a new program that agrees with everyone on everything all the time.

Google Deep Mind boss, Shane Legg explained, “we analyzed American voters through our hugely popular Facebook rival Google+ and discovered that above all Americans like politicians who believe in what they do whenever they do. Voters also find a complete lack of principles and overwhelming untrustworthiness reassuring factors. We are confident this will be a winning formula.”

Dr Tanguy Chouard, a senior editor at Nature who has been following the Politics matches as part of the review process, has described Hillary Mark 2 as “really chilling to watch”.

If Hillary manages to win, it will be the first such victory for a computer program in Politics, and a decade before anyone expected it. Deep Mind has refused to comment on rumors that they previously ran a cyborg for the position of Californian governor in 2000.

I'm even more socialist than Bernie, says Clinton
Americans stick it to the rich elite by electing a super rich elite president
Tweet