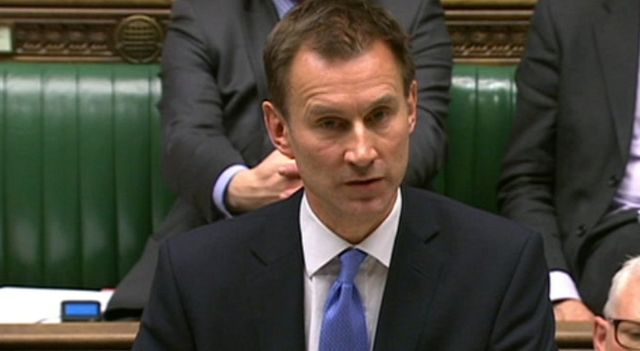 Striking doctors are attempting to overthrow the government and are probably all antisemitic, Jeremy Hunt has claimed.

The Health Secretary made the explosive accusations in an interview with the BBC’s Laura Kuenssberg earlier today, in which he said: “Defunding and dismantling the National Health Service is one the central policies of this government, and any attempt to oppose our plans will be viewed as a potentially treasonous act of terror.”

“Unlike the high quality healthcare professionals who work for Virgin Care, NHS doctors are not fit for purpose and are probably all antisemitic.”

“Like many Conservatives and some Blairites, I personally stand to make a small fortune out of the privatisation of the NHS.  We’re essentially going to get billions of pounds of money from the taxes of hardworking people and pour it straight into our bank accounts, and just thinking about that gives me a raging hard-on.”

Mr Hunt’s comments echo those made by David Cameron during an earlier strike by doctors. Mr Cameron said: “When the Jeremy Corbyn and Labour’s London mayoral candidate are both so friendly with terrorists, is it any wonder that junior doctors feel it is acceptable to also associate with terrorists as they have done so cynically today.”

“I do not know how anybody could actually think decent healthcare provided by the state and free at the point of use is a good idea, so they clearly must be terrorist sympathisers.”

As tensions between junior doctors and the government escalate, the Prime Minister is also under pressure from Daily Mail readers to make a fascist show of strength.

It is understood Mrs May is considering using the newly established paramilitary wing of the Conservative Party, which is a wholly owned subsidiary of G4S, to crack down on the democratic rights of striking doctors and their supporters.

Baby Jesus and his parents should have been sanctioned and left to starve, say DWP
John Bercow under fire for calling stupid woman "a stupid woman"
Tweet

5 thoughts on “Striking doctors want to overthrow the government and are antisemitic, Jeremy Hunt Claims”