A leave voter has taken to social media to describe her joy at being one step closer to ‘getting are country back’, it has emerged.

In the comments section of a Guardian story, anonymous user JaydaFransen88 wrote: “I am so glad are MPs have done there duty and respected the will of the 17 million people that voted leave.”

Continuing, Ms Fransen wrote: “Today were another step closer to getting are country back. I hope soon we’ll be able to kick out people I consider to be foreign, and to stop anybody who isn’t British from using the NHS.”

“After all, it’s called the National Health Service not the international health service, and the historical name of a public service is really important and should determine how it is run in the year 2017.”

After taking a quick toilet break and making a call to see how her friend Paul is doing in prison, Ms Fransen returned to her computer and put together a meme containing the words: “British and proud to be getting are country back. Share if you agree and want to help to spread propaganda for a fascist group like Britain First.” 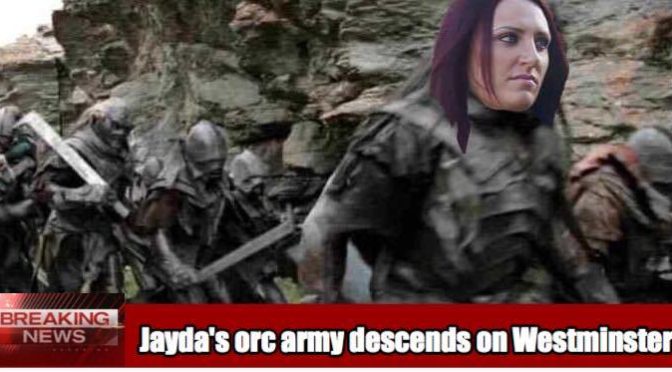 Britain First’s Jayda Fransen has pledged to march on Westminster at the head of an army of 10,000 uruk-hai, it has emerged.

Speaking exclusively to Newscrasher, the deputy leader of the far right group said: “Next week a panel of judges will decide whether Theresa May’s right wing dictatorship has the right to take us out of the EU, against the wishes of the majority of the public and parliament.”

“To help the judges make up their minds, I will be marching on central London at the head of a 10,000 strong army of fighting uruk-hai, to pressure these judges into accepting the fact that us fascists are now in control, because that’s what people voted for.”

“Paul Golding and I will be praying to Our Lord Jesus Christ that all the judges are white, Christian heterosexuals with a penchant for fascism this time around.”

Fransen added: “We expect to have around 100 ill-informed Brexit-supporting pensioners marching with us as well, although numbers may dwindle somewhat once our uruk-hai begin to hunger for man-flesh.”

In association with Mordor First.

Far-right group Britain First has announced it will hold a competition to find ‘the ugliest face of British fascism’, it has emerged.

Britain First leader Paul Golding said: “Like many fascist groups, we have something of an image problem, but we believe our Ugliest Face of British Fascism contest represents the final solution to our woes.”

“We will tour the country stirring unrest and bigotry, and will leave no stone unturned in our as yet unsuccessful quest to bring attractive and articulate white, British racists into our dangerous neo-fascist group.”

A spokesman for the group confirmed that neither Golding nor his deputy Jayda Fransen will enter the pageant ‘because their aryan beauty would see them vanquish all challengers’.

Newscrasher understands the formerly corrupt but now totally honest Neil Hamilton has agreed to be one of the judges.

However, both will feature alongside the lucky winners in a nude Britain First calendar which aims to raise funds for the purchase the uniforms Golding and his band of fascist ‘Greenshirts’ are in urgent need of.