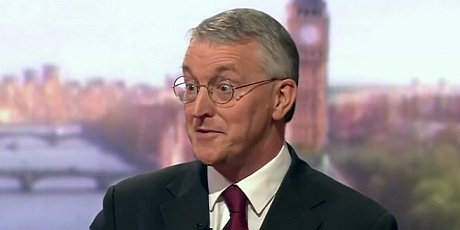 The United Kingdom should be bombing children in Syria just like the Assad regime and Russia, Hilary Benn has maintained.

The MP for Leeds Central and former Shadow Foreign Secretary said: “When I saw the photo of that little wounded boy from Aleppo all covered in blood, my first thought was of the rousing nationalist speech I gave in Parliament in support of bombing Syria.”

“If the right wing dominance of the Labour Party lasts for a thousand years, men will still say, this was my finest hour.”

“I also feel deeply ashamed that British pilots are not taking part in the bombing of civilian areas, righteously wounding and killing defenceless people of all ages.”

SAS veteran Ross Kemp added: “I’m disgusted that Jeremy Corbyn opposed military action in Syria, denying  a hard-man like me the chance to front a reality TV show about the Syria war, on a TV channel owned by my good friend and Labour Tomorrow funder Rupert Murdoch.”

“And that is why I fully support the heroic campaign of backstabbing and protracted leadership challenges that Labour’s hard right moderates have been prosecuting against the elected unelectable leader of the Labour Party.”

Brexiteers demand invention of virtual reality headset which superimposes white people over foreigne...
Remainers to have plenty of time to debate Brexit after we leave EU, say Tories
Tweet