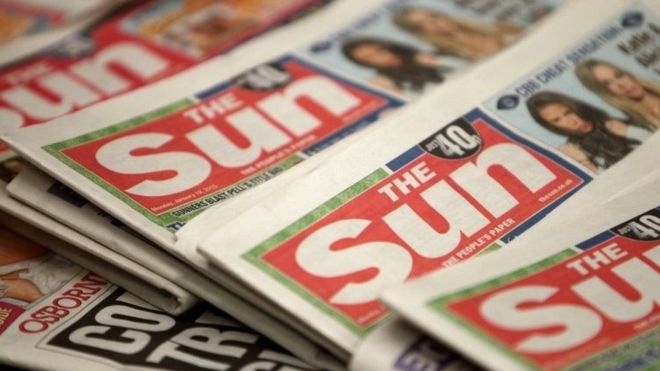 Several British tabloid newspapers, including the Sun,  the Daily Mail and the Daily Express have come under pressure from Facebook and Google to stop publishing fake news, it has emerged.

Daily Mail Columnist Katie Hopkins reacted angrily, telling listeners on LBC: “Were it not for the naked lies that the Mail, Express and others told during the EU referendum campaign, we would not be sitting here today planning for our glorious departure from the EU.”

“Outright racism and xenophobia would also not have become so socially acceptable as it is now thanks to the way certain heroic newspaper editors stoked fear and resentment towards foreigners and people who are not white British.”

“Surely we should be praising these patriotic newspapers and their staff, instead of trying to stop their foul lies from spreading all over social media like a virus?”

Sun editor Tony Gallagher was even more defiant: “At the Sun we haven’t actually published a factual story since 1983, and we have no intention of starting now.”

“If we’re forced to actually publish real stories and facts, how would we ever keep the working classes oppressed for our Tory masters?”

“An irrational fear of immigrants, Muslims and the EU is all that stands between the grossly unequal society of nightmares we have now, and a centre left paradise where wealth is much more fairly distributed and everybody has opportunities to succeed in life.”